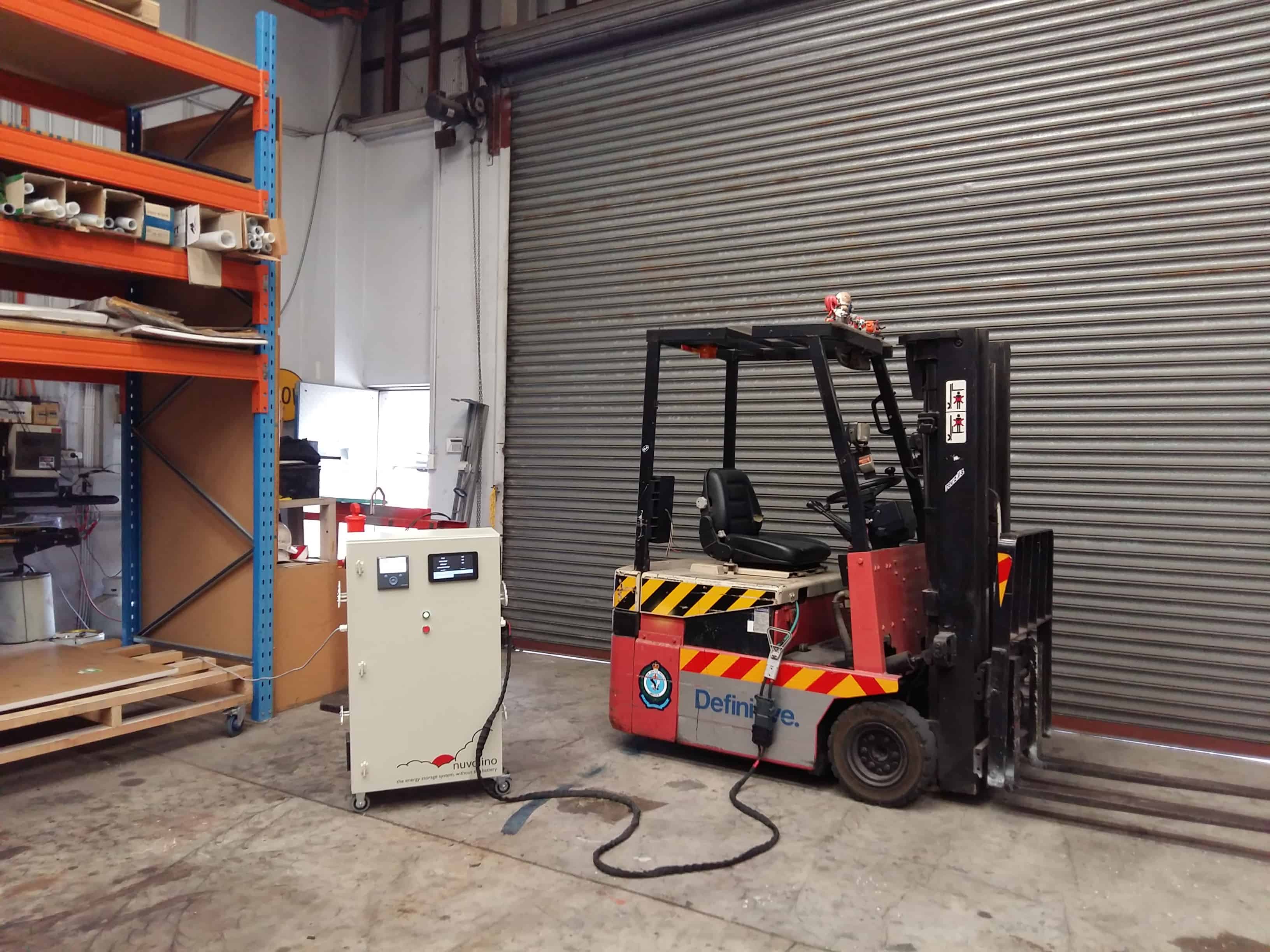 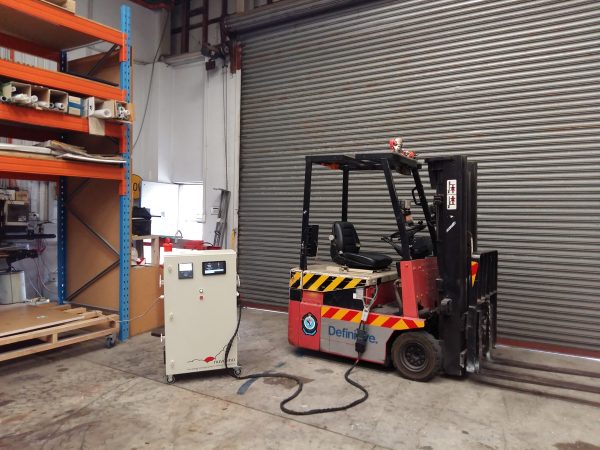 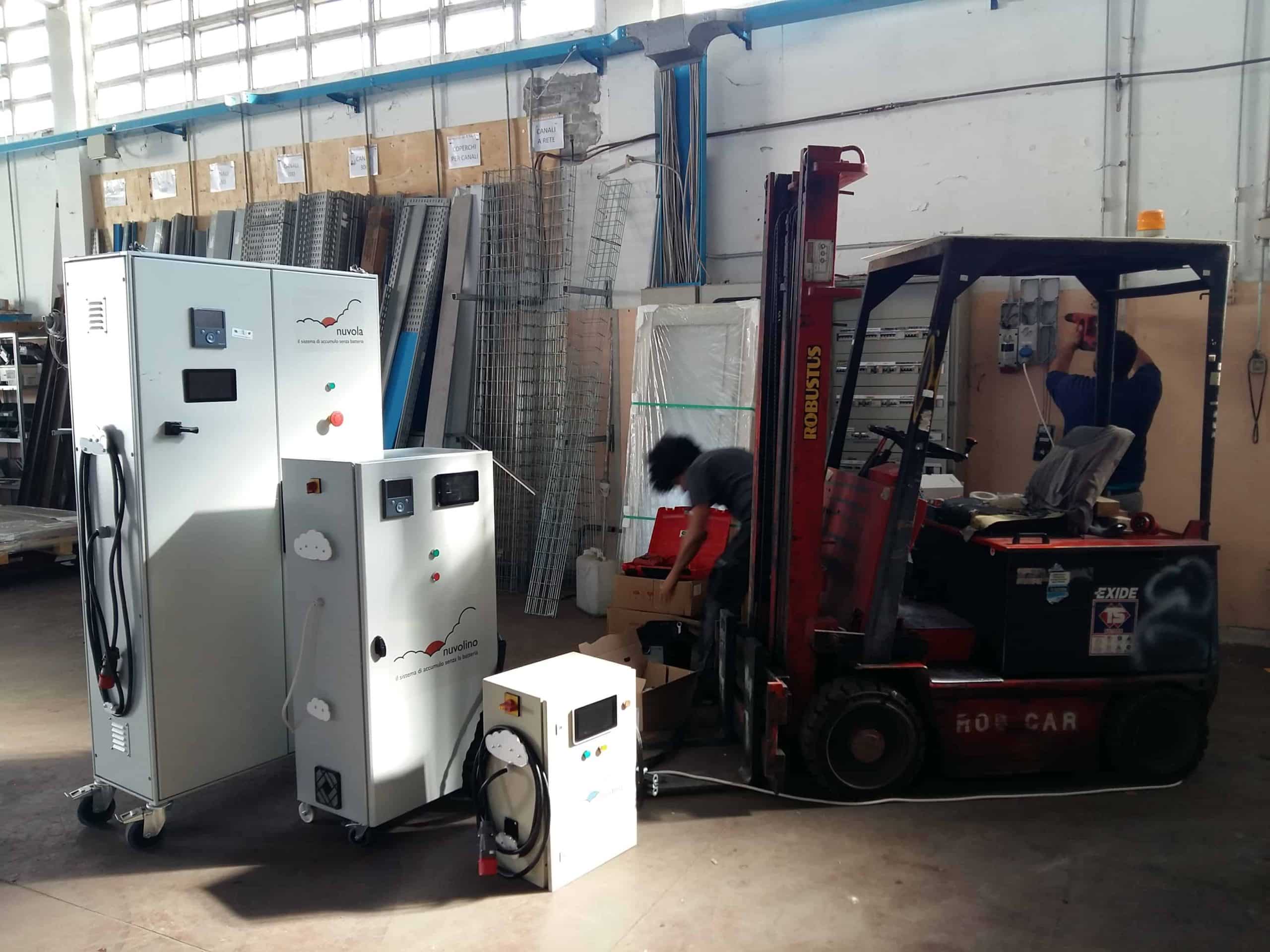 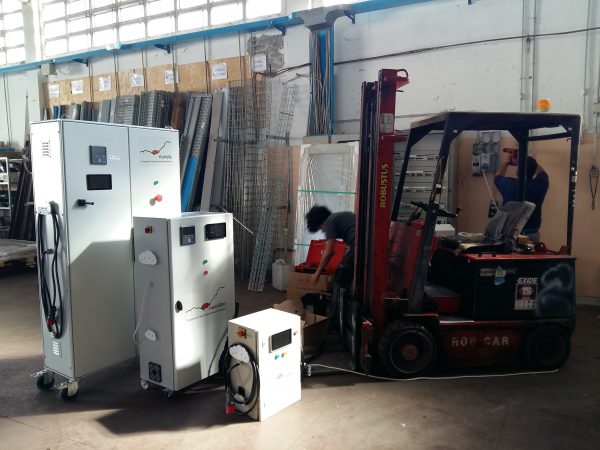 In an industrial context, the RossiniEnergy bidirectional chargers make it possible to optimise the self-consumption of solar energy.

How to conserve energy at a low cost? The batteries currently sold on the market do not provide a quick return on investment. Why not use existing electric vehicle batteries? From this reflection and the observation of a widespread but little-known electric vehicle —the forklift— were born the ideas of Cloudino and EDI, energy storage systems without dedicated batteries.

Cloudino and EDI are two systems for storing energy differently.

Electric forklifts in companies are real reservoirs that can be used to reduce the electricity bill, while improving the health of their batteries and their energy autonomy.

The Cloudino system transforms the forklift into energy storage for the building.

In Belgium, for example, energy storage represents a real opportunity: the low cost of buying back solar production and the high electricity cost create an economic, but also ecological, interest in the self-consumption of solar electricity.

Its operation is very simple and transparent: when the truck is parked, simply connect it to the Cloudino system and the decision algorithm will take care of the rest, guaranteeing you a sufficient state of charge the next day and an extended battery life by reducing the depth of charge/discharge cycles.

Its installation is as simple as that of a household appliance. Thanks to the three-phase socket and the automatic connection via the 4G network to the energy meter powered by Cloudino, no power interruption is necessary and commissioning is completed in less than an hour.

Some companies present a special opportunity: those that have photovoltaic panels and often charge their forklifts.

Companies in such a situation have all the ingredients to intelligently reduce their electricity bills.

Some consumptions are more flexible than others over time. For example, in a domestic installation, for a washing machine, it is economical to decide to use photovoltaic electricity, manually or automatically activating consumption during sunny hours.

Today, the same concept is possible, but on an industrial scale.

At the end of the week, EDI observes instantaneous PV production measurements and production forecasts over the next 48 hours based on satellite data.

EDI then decides the best time to recharge the forklift trucks, so that only solar energy is used and charging costs are saved day after day.

In addition, during the week, the forklifts are recharged daily, at night, taking advantage of the hours at the best prices of electricity and reducing the peak demand power with a load arrangement.

An online portal allows you to monitor the charging status of the trucks, possibly activate a forced recharge outside of the control algorithm and ensure that the batteries are ready to operate the next day: if solar production is low, on Sunday evening, a recharging report is automatically carried out and the batteries that are not at 100% are charged up for a perfect availability to use the forklifts.